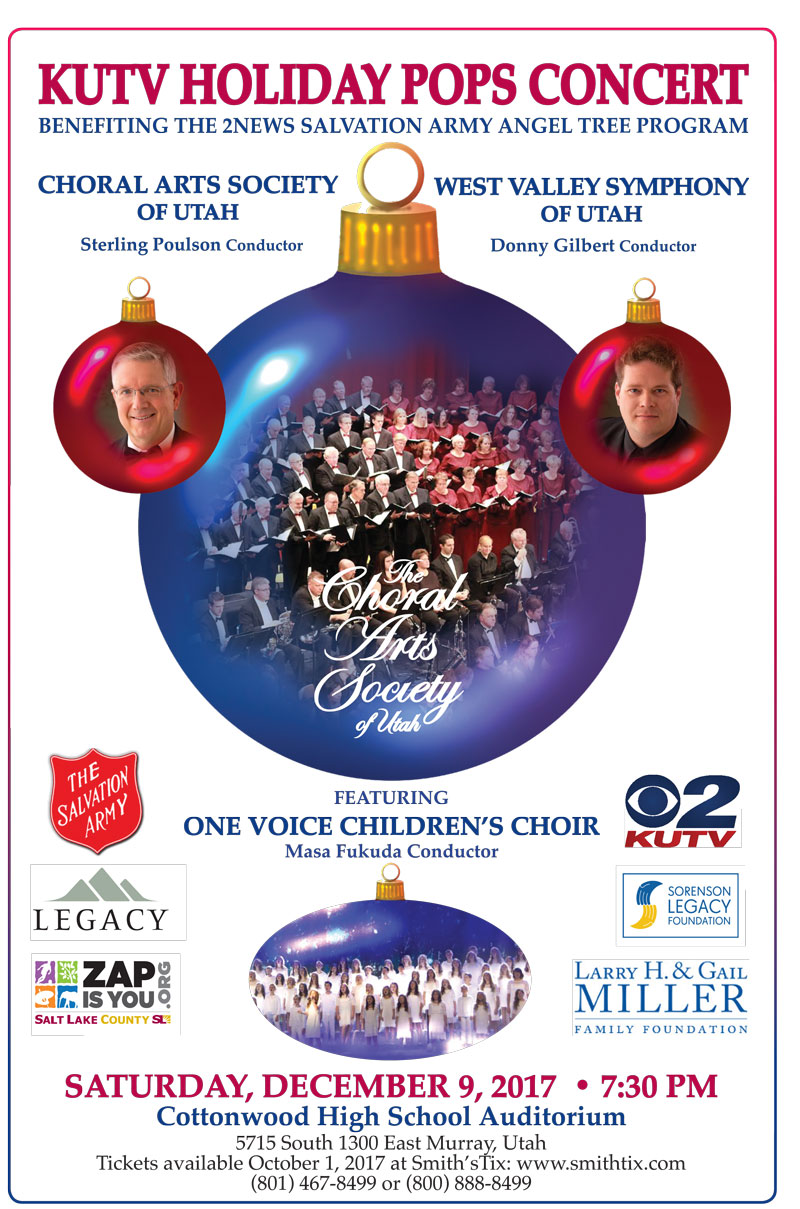 This year’s KUTV Holiday Pops with music director Sterling Poulson, will feature the 100-voice Choral Arts Society of Utah, One Voice Children’s Choir and the West Valley Symphony of Utah! This amazing line-up of performers will kick-off your holiday season with beloved Christmas favorites the whole family will enjoy!

This year’s featured guest artists are no strangers to Utah’s choral music scene!  In early 2014, they were featured with Alex Boyé in a music video cover of “Let It Go” from the Disney movie Frozen. The video went viral with over 60 million YouTube views and was named YouTube’s Top Cover of 2014. In August 2014 over 100 choir children traveled to New York City and performed in the live quarter-final round of AGT at Radio City Music Hall. Since its inception over 500 Utah children have had the opportunity to participate in the choir. One Voice Children’s Choir has received numerous awards including the John Lennon International Music Award and the Best of State Award for Best Children’s Performing Group as well as the BOSS statue for the most outstanding in the Arts and Entertainment division.

The West Valley Symphony of Utah, with music director Donny Gilbert, is well known for their participation in the KUTV Holiday Pops Concert. The 70-piece orchestra performs 5-6 concerts each year. In 2016, the orchestra performed at the Larry H. & Gail Miller Christmas Carole Sing-a-long at the Vivint Arena in Salt Lake City, and will be featured again in 2017.  In 2018, the orchestra will perform at the Days of ’47 KUTV Pops Concert with the Choral Arts Society of Utah.

Members of the 100-voice Choral Arts Society of Utah volunteer their time and talents to provide quality performances, many of which benefit schools and organizations providing humanitarian services to the local area, including this benefit concert for the KUTV 2News Salvation Army Angel Tree Program.  The concert provides gifts of the season to hundreds of children and senior citizens along the Wasatch Front.  This is a wonderful family event for all ages and we will have a special visit from Santa Claus!

We wish to thank Legacy Retirement Communities, the Sorenson Legacy Foundation and the Larry H. & Gail Miller Family Foundation for their continued financial support.  We also thank KUTV 2News for their media support. Funds from the Salt Lake County Zoo Arts & Parks are also used in the presentation of this concert.