The Holiday Gift of Music 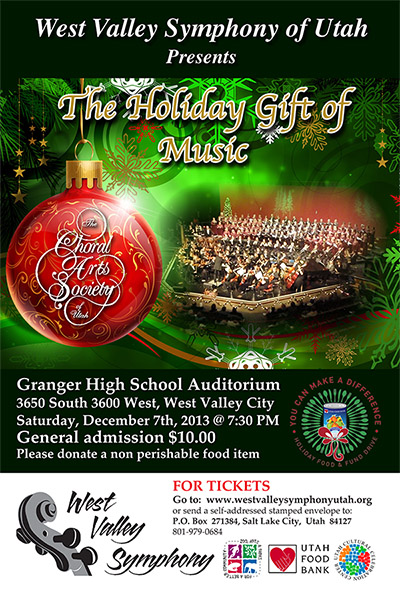 Tradition and Adoration are the themes of this concert featuring new renditions of classics such as “God Rest Ye Merry, Gentlemen”, Irving Berlin’s “White Christmas”, Leroy Anderson’s classic “Sleigh Ride”, and standards such as “Jingle Bells”, “Silent Night”, “Still, Still, Still” and many others. Come ready to sing along with some of your favorite Christmas carols and maybe even a visit from jolly old St. Nick himself. This concert will also help with donations to the Utah Food Bank. Please bring a non-perishable food item to the concert to help those who are less fortunate, so we can turn this truly into a Holiday Gift of Music.

The West Valley Symphony, now in it’s 22nd season is an all-volunteer orchestra of nearly 70 musicians.  In 2012, the orchestra was featured with the Choral Arts Society of Utah at the 65th annual Days of ’47 Pops Concert at Abravanel Hall in Salt Lake City.  For over 22 years, the orchestra has performed 3-5 concerts each year, and for over 10 years the concert schedule included the KUTV Holiday Pops Concert with the Choral Arts Society of Utah, which was televised in Utah in December 2011 & 2012 on KUTV.  The orchestra now gives regular concerts at the Utah Cultural Celebration Center in West Valley City, its permanent home, and will also perform at the Granger High School auditorium. The orchestra will return as guests at the KUTV Holiday Pops in 2014.